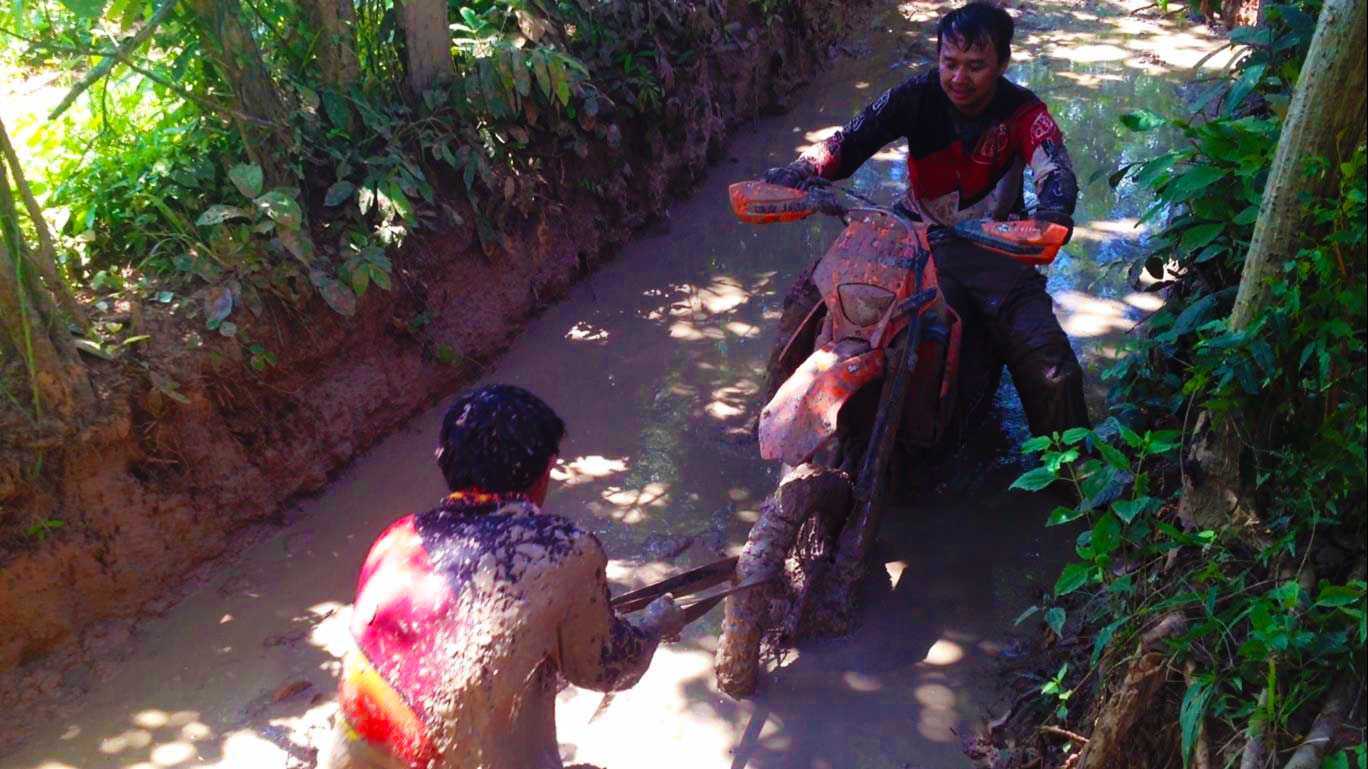 Riding in the wet season is never dull. Trails that are fine to ride on one day can become waterlogged overnight. It was a bit like that last Sunday. We all met up for a breakfast of rice and pork, and strong iced coffee. The perfect way to start a riding day! After filling up our bellies and petrol tanks we were soon on the road.

We were heading to an old trail we hadn’t done in a while which was, for Cambodia, fairly hilly. Now, most of the country is fairly flat, interconnected with great single track winding through the forest. Loads of wide open sand riding through the trees in the dry, and muddy waterlogged ruts in the wet. If you want hilly regions you really have to get onto the routes along the borders in the East, traversing Ratankiri and Mondulkiri provinces, or through the Cardamom Mountains in the west and parts of Kirirom National Park. Single track is great, but it’s nice to break it up a bit. There are some good hill climbs scattered around the country but they are pretty much just that. You go up and then you come down…to more single track.

Today’s route offered muddy bogs through the forest and some nice routes up what Cambodians would call a mountain, but to us is just a hill. We were treated to some nice, technical rocky climbs and steep, rutted descents. Some awesome wide open riding at the top of the hill, had us power sliding through wide turns, to the final descent with some neat little jumps and drop offs to keep us happy. Soon we were back on the flatlands and on our way to our lunch ..… Until we got stuck!

This is what I was talking about at the beginning. A couple of weeks ago this probably would have been passable, but a mixture of lots of rain, and cows and buffalos and Ox carts led to an extremely muddy sticky bog. It didn’t look to bad, so the first three, including me, went for it. You can never quite tell what is under all that water. This time it may as well have been superglue. Pros went first and he managed to get through the worst of it …just, but succeeded in churning it up so La got sucked into the bog and could no further. I tried getting up the bank on my left but that proved to be a mistake as it turned out to be even deeper. Now the best way to get bikes out of these situations is with the tugger straps and a bit of rope, but we were stuck so fast that even they didn’t work. After Pich lost his footing and fell head first into the quagmire, we tried a different approach, which entailed two pushing from behind and pulling the front wheel bit by bit from the spokes with the rope we had. That with the bike running got us out of the worst. It took a while, but was effective.

With a combination of ropes, branches and brute force it took six of us about thirty minutes to get the two bikes out. We collapsed on the bank exhausted and covered head to toe in stinky water-buffalo mud, but with massive grins across our faces. There were some funny moments to say the least. After a short rest we made our way to a late lunch. We had had more waterlogged adventures planned for the afternoon, but by the time we finished lunch and rested a bit it was after four o’clock, so we opted for an easy ride back to town.

Great ride lads can’t wait for the next one!