I’ve lived here for quite a while now, and one thing I never really get bored with are the many Angkorian Temples that are scattered around Cambodia. They fascinate me. The sheer scale of the empire back then and the amazing structures and designs are just spectacular. It’s like stepping back in time. A cliché I know, but being able to get to these hidden gems on a dirt bike, riding through remote jungle is a real adventure, that keeps one of the things that I loved about Cambodia initially, alive for me (with the advent of full on tourism at Angkor now, it’s like being in a theme park) There is something magical about turning up at these remote temples at dusk with the setting sun filtering through the trees, or rolling up in the morning with the mist hanging there as the surrounding forest comes to life. 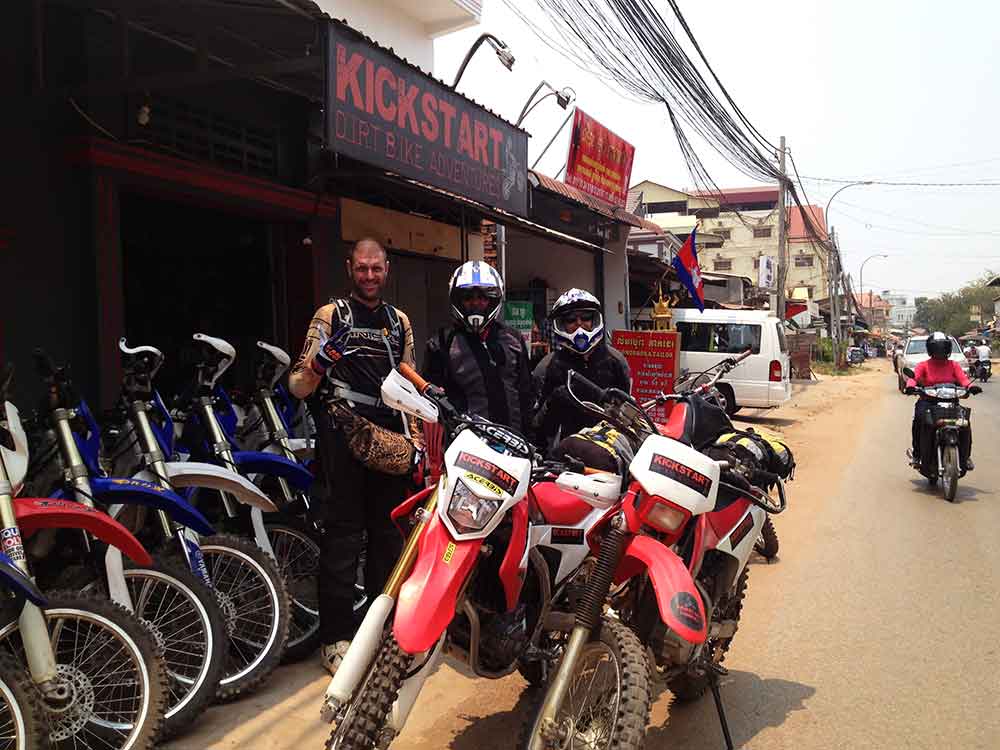 Earlier this month I had the pleasure to take Gary and Emma, originally from France and now living in Singapore, on a three day loop of some of the more famous temples. On the itinerary were Koh Ker Temple and Preah Vihear on the Thai border. 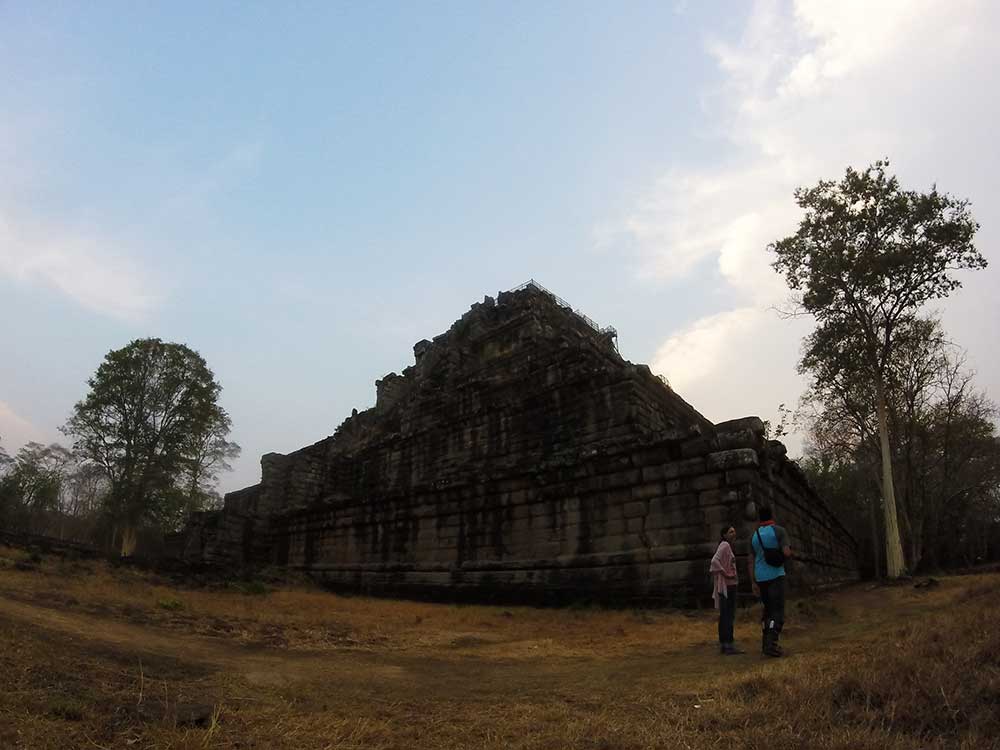 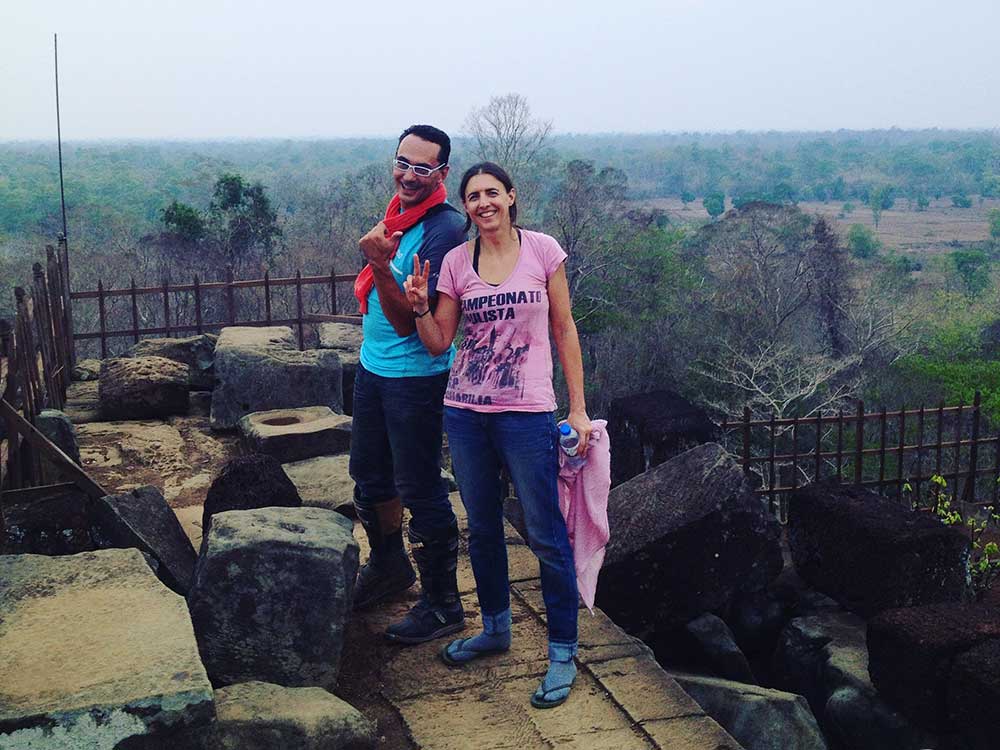 The tour was booked last minute and Gary & Emma didn’t have much time, so as soon as they landed, we whisked them back to Kickstart HQ and within an hour we were on the road. Gary had off-road experience, but Emma none so as we made our way out of Siem Reap we jumped on a mix of single track and graded roads so I could get an idea of what the best route would be. As we left fairly late we opted to jump on tarmac and graded red dirt roads to get to our stop for the night, via Beng Melea temple for lunch. We arrived at Koh Ker in good time, so after dumping our bags at the guesthouse we drove to the main complex to catch sunset. As we drove through the surrounding forest the light was beginning to fade already. It had been raining and the wet brought out the colours of the leaves and the mossy temples. At the top of the main pyramidal temple we were rewarded with panoramic views of the surrounding countryside and jungle canopy. Pretty cloudy, so not much of a sunset, but the clouds broke and the crimson sun shone through for a second. Back at the guesthouse we had a good meal of stir fried veg and some grilled pork, rounded off with some beers. 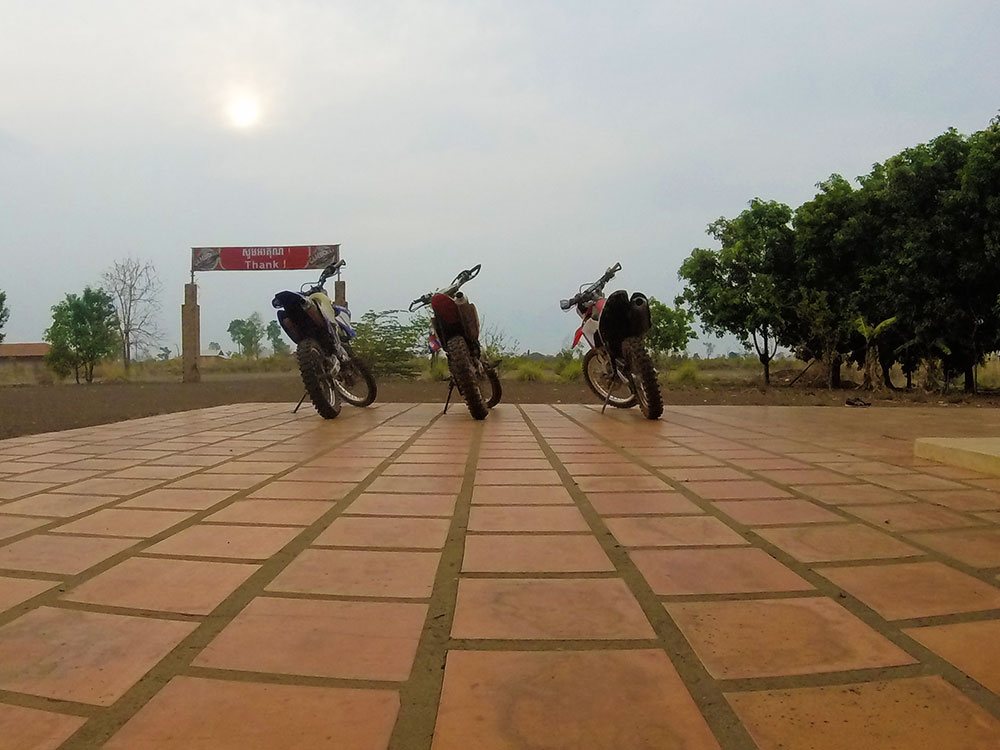 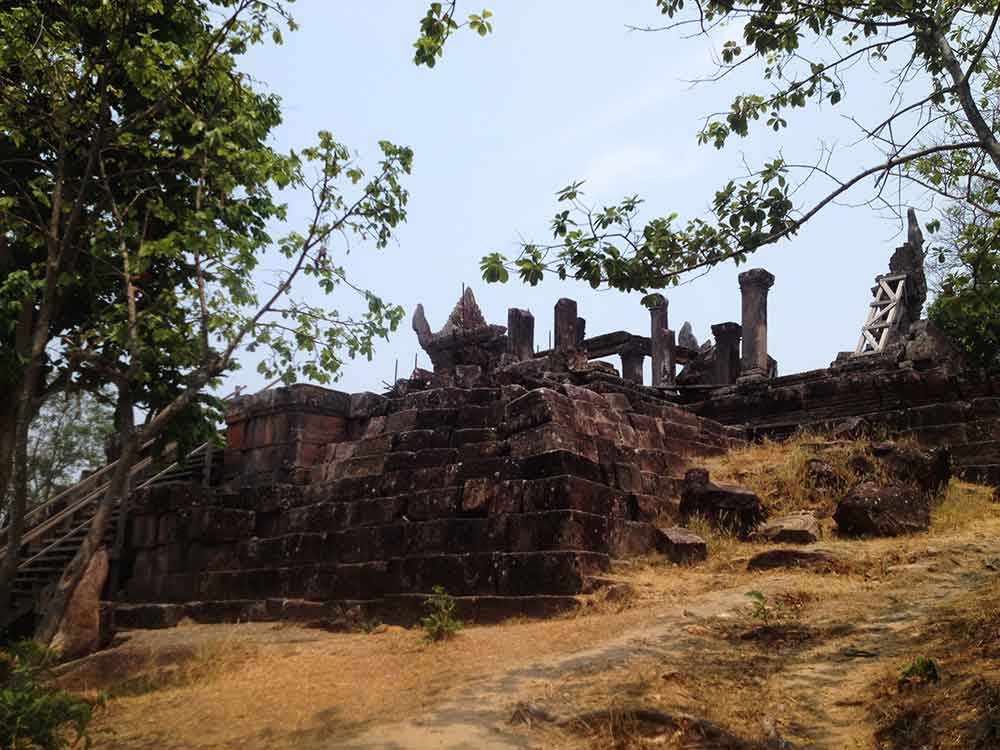 Next day we set off early. It had rained heavily the night before so Emma wasn’t up for the jungle trail we had planned, so we had to jump on the highway up to Preah Vihear temple in the North. It worked out well, as we managed to get to Anlong Veng further along the border the same day avoiding ‘castle black’. Preah Vihear has changed a bit since when I first went up. Back in 2000 there was barely a road going up, and in places consisting mainly of lots of loose, sandy climbs. Now the road has been concreted and is a leisurely ride up. We opted to leave the bikes at the bottom and take the pickup, as Emma wasn’t sure about the steep climbs at the top. But, you’re allowed to ride up if you wish. 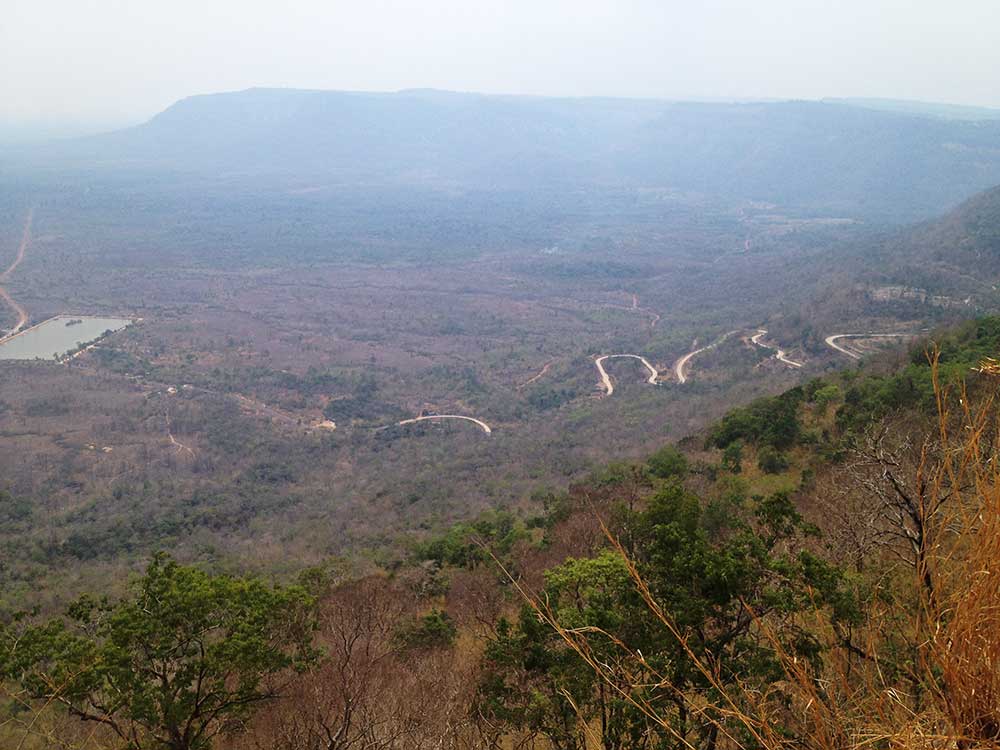 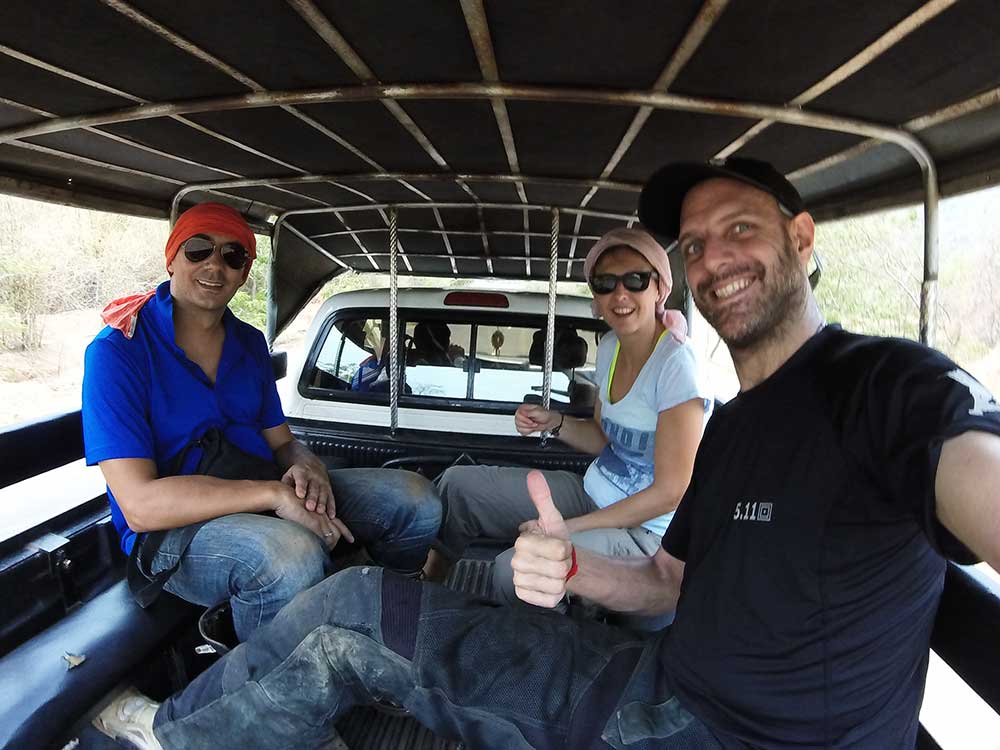 Preah Vihear is enormous and sits atop the Dangrek Mountain range that creates the northernmost border with Thailand. It was built during the 9th Century so pre dates Angkor, and shows the sheer might of the Khmer Empire back then. At the far end of the complex the landscape drops away from a 525 metre cliff as we relaxed and took in the breathtaking views. We could trace our steps from the morning and where we were headed after lunch. The temple has been in contention with Thailand over who actually owns the land the temple is built on and there has been fighting in recent years. After a delicious lunch of fried chicken and morning glory, we made our way down the mountain and followed the Mountain range to Anlong Veng, the last stronghold of the Khmer Rouge; Pol Pot’s resting place and our stop for the night. 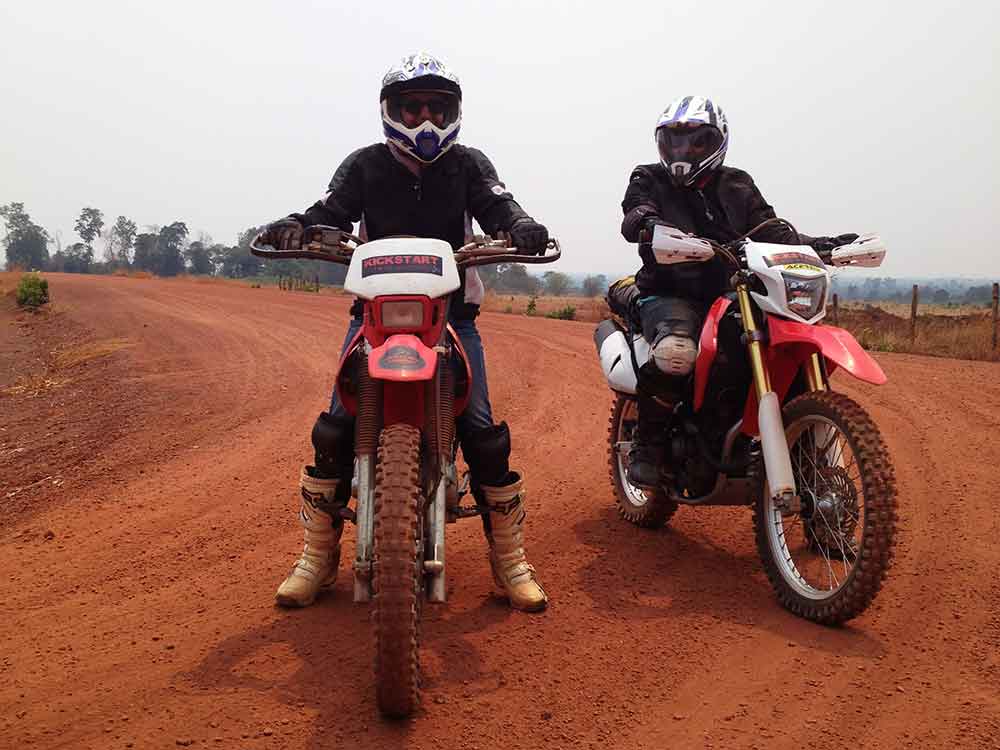 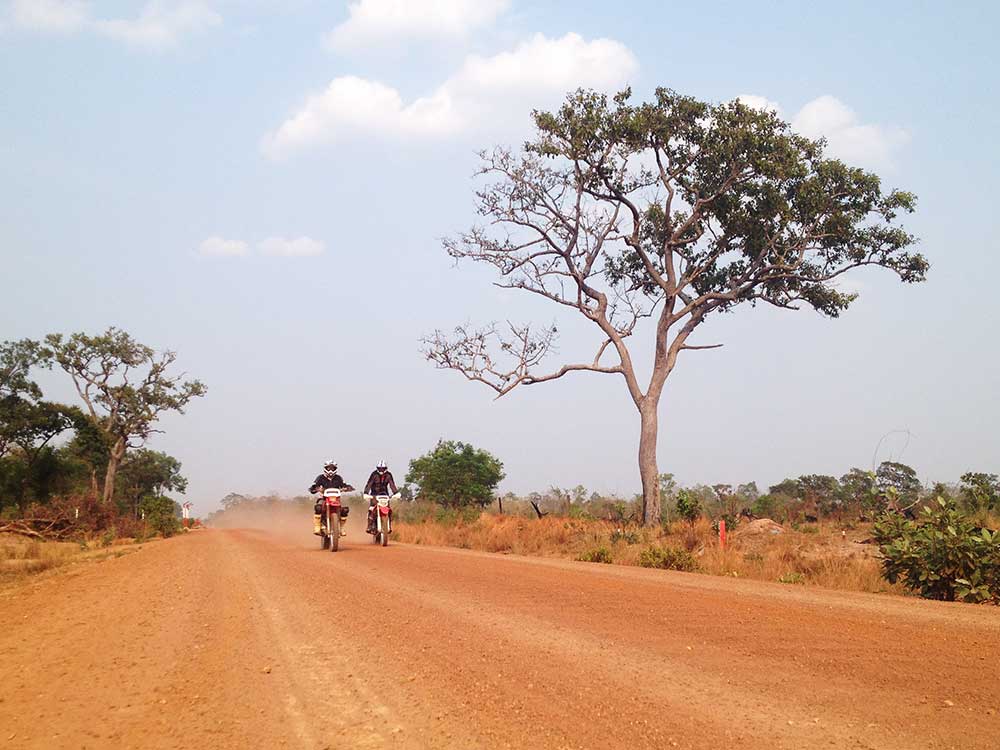 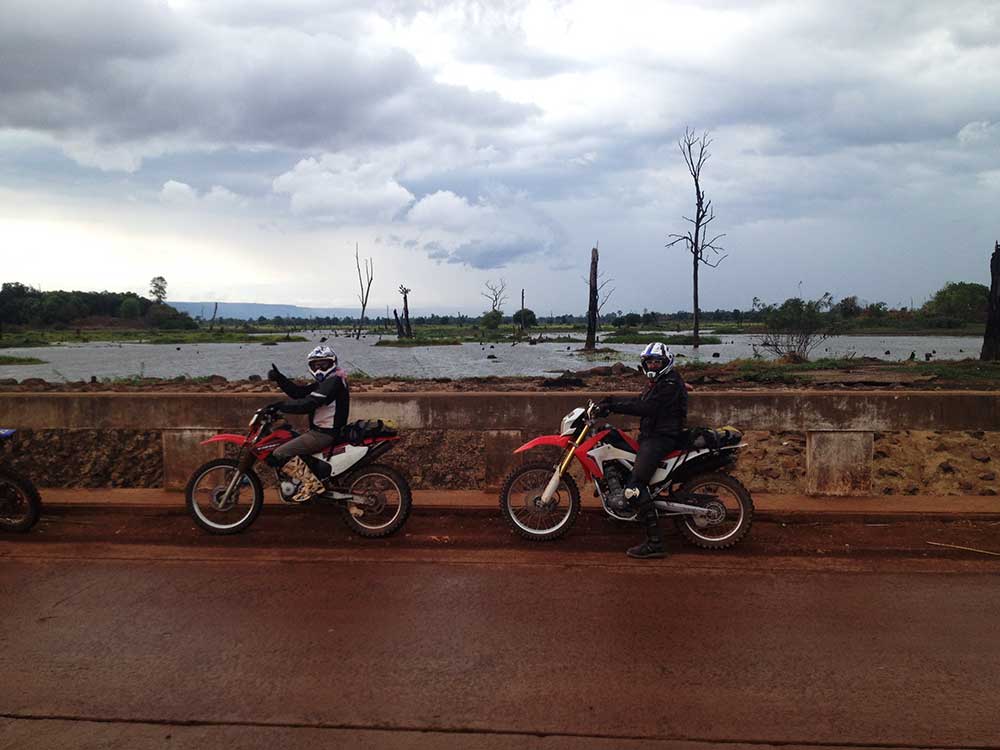 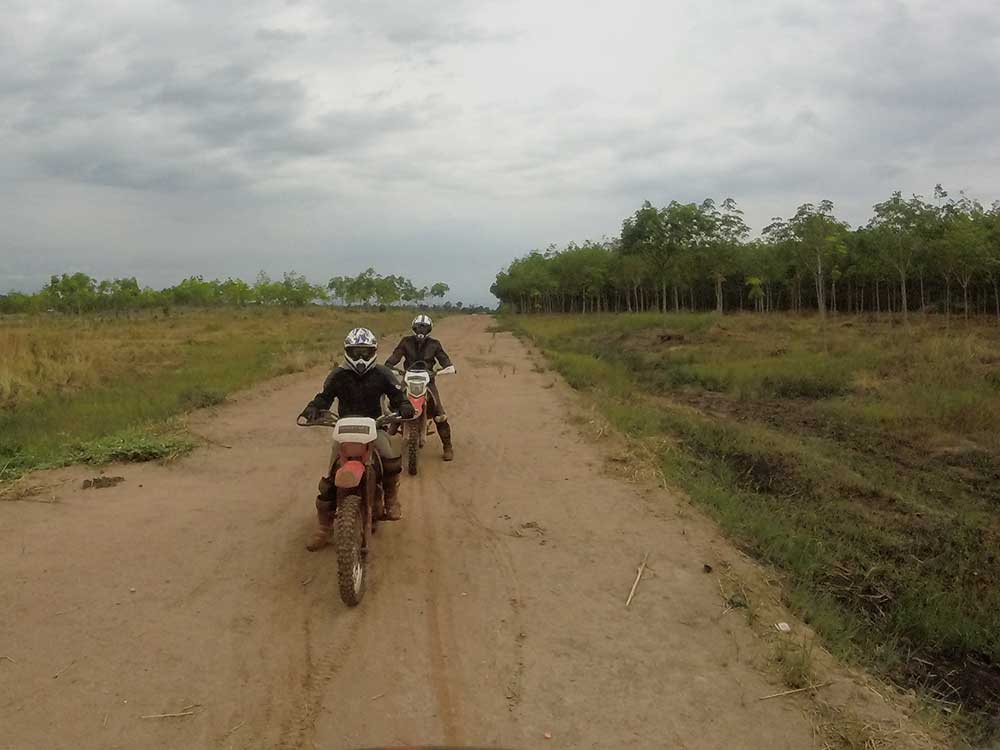 Next morning it rained heavily just as we were about to leave, which gave me time to fix Emma’s bike, which wasn’t running well at all. After checking the usual suspects it turned out the main Jet had worked its way loose. That would do it! The guys weren’t up for seeing Pol Pot’s grave so we checked out Ta Mok’s house which overlooked the Petrified Forest. Ta Mok was known as the butcher of the north, but in these parts he was seen as a kind, generous man…I wonder why… 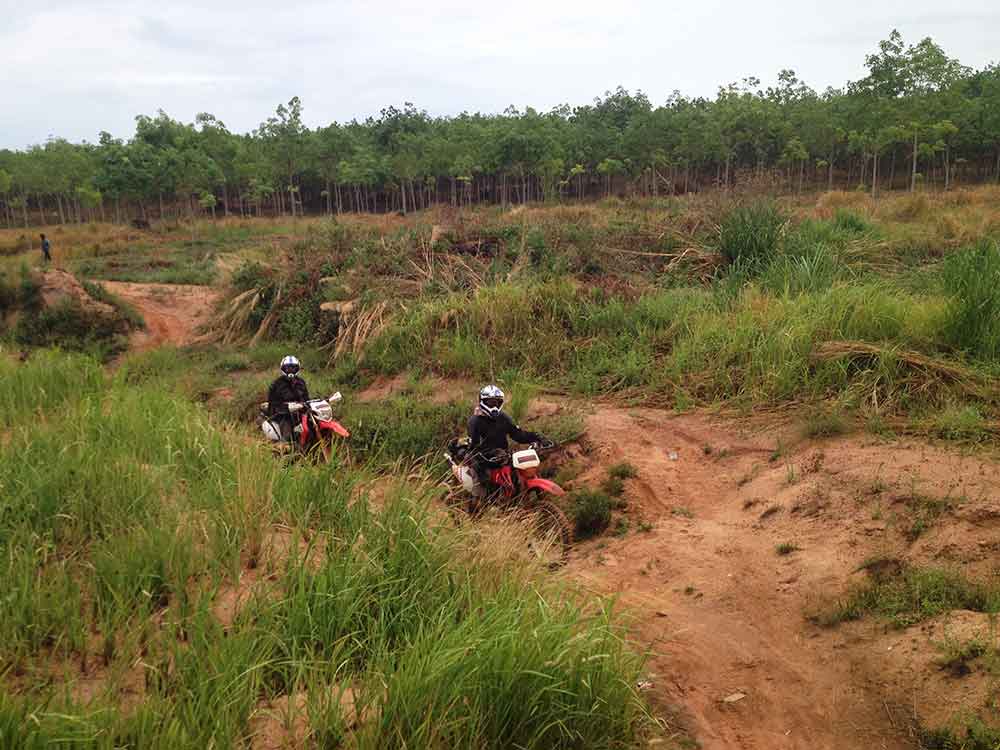 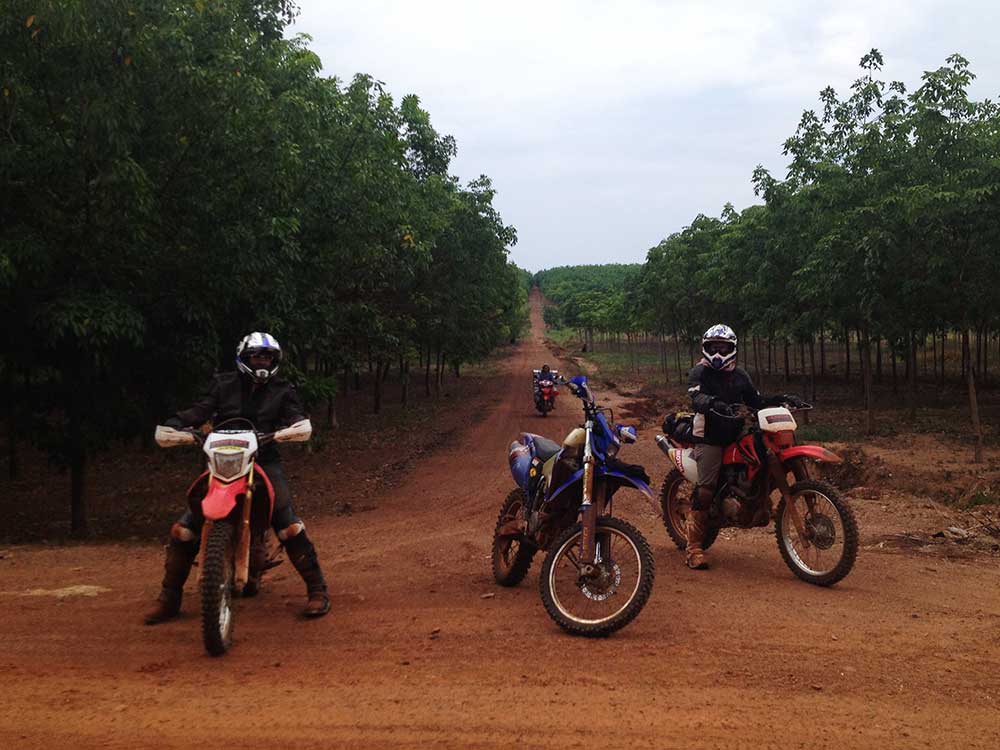 After getting a few snapshots, we headed back to Siem Reap. The road varied from graded dirt roads to muddy trails through the forest. We passed through rubber plantations and through scenic villages in the hilly northern countryside. The road had washed out in one place and we had to drop off onto sandy single track on the side for a bit. Emma for a first time off roader did tremendously well. We soon arrived in Srey Noy where we stopped for lunch. 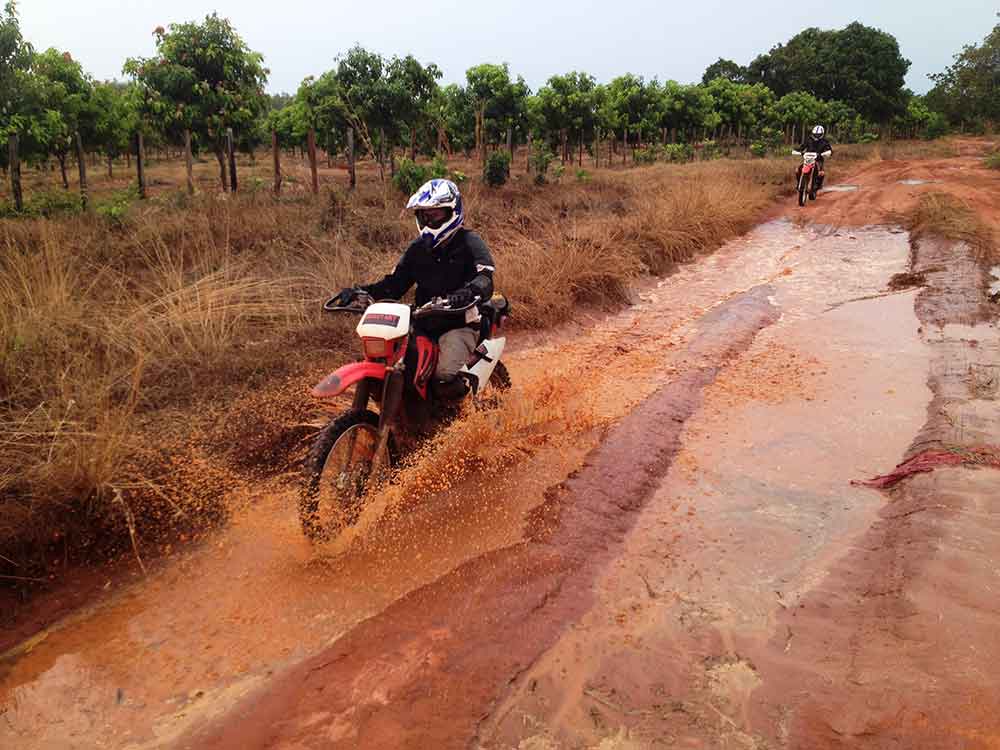 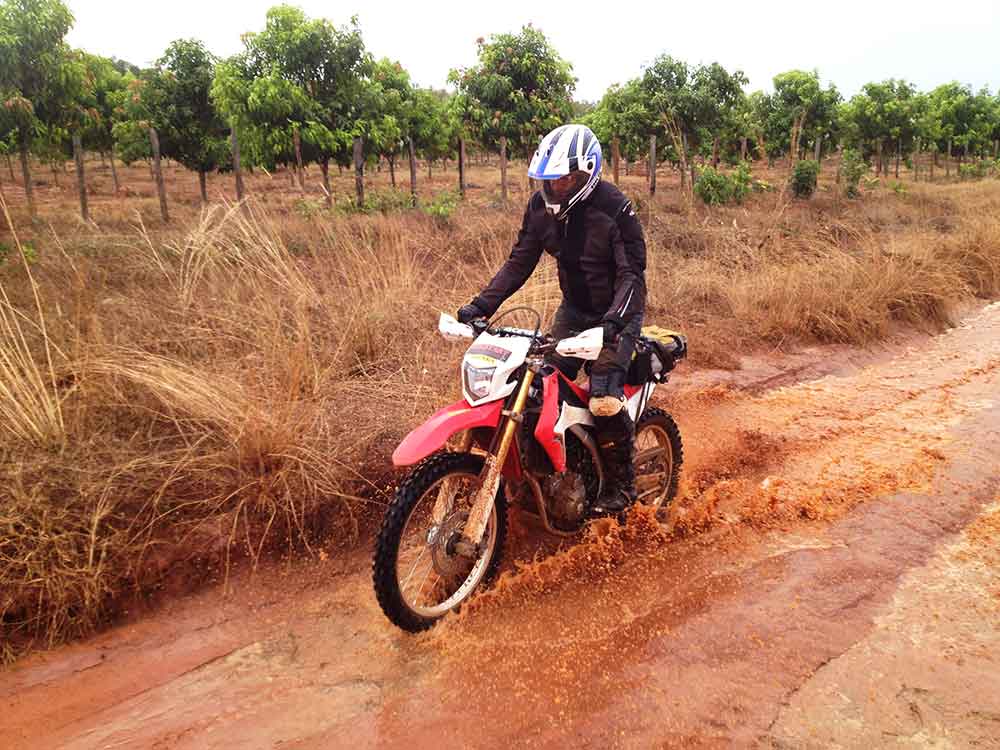 The last stretch was nice windy routes at the base of Kulen Mountain and some large puddles and muddy ruts that kept us on our toes. It was getting late and Gary & Emma were tired after today’s adventure so we jumped on the highway, rolling into Siem Reap late afternoon.

I really enjoyed getting to know Gary & Emma, and it is very rewarding to see someone with not much off-road experience taking it in their stride and having so much fun. Brilliant !!!